Let me begin by saying, I am not afraid to admit that I enjoy a good info-graphic, especially when the graphic is clever or snarky. What happens when you combine info-graphics with comic books? Pure bliss and awesomeness, that’s what.

YUSSSSSSSSSSSSSSSSSSSSSS!
My good friend boo sent this to me a while back, and it pretty much made my day. However, it also brought up some bitter resentment toward a certain Hollywood trilogy adaptation of my beloved X-Men comic book series.
Now, if the only X-men mythology you’re aware of is from the movies…shame on you. Check out some comic books or at the very least, the cartoon series that used to be on Fox kids years ago. This animation series stayed pretty true to the 1990s comic book The X-Men, (the original) and the narrative set forth by Marvel. O.K. yeah, Jubilee was a total spaz who was bothersome (that’s a nice way of putting it), but otherwise this show was the highlight of my Saturday mornings back in the day. The third season showcased one of the best comic book story-arcs in my opinion:

Back to the big screen adaptation. When it comes to the third installment in the X-Men series of movies, I only have two words: HOT MESS! Oh noes…this is a touchy subject, and I feel a rant coming on.
I didn’t mind the first two movies and in ways I could appreciate their “take” on the X-Men mythos. Yes, there were a few liberties. For example, in the original comic book series Iceman (Bobby Drake) was a part of the original X-Men crew while the movie decided to make him a promising student in Xavier’s school for the gifted. The scene in the second movie where Bobby “comes out” to his parents as a mutant made this worth it and echoed the metaphor of the mutants representing the marginalized, so many gay youth could relate too, which is what made the original comic book series so amazing. That and the epic story-arcs. While there were a few inconsistencies, this is to be expected with Hollywood adaptations. For the most part, the characters were interesting and they stayed true to the core elements that existed in the comic books. The movies also did a nice job highlighting the tensions that existed between the X-Men and the Brotherhood of Mutants.
The third movie was a travesty! Why, gentle readers, you ask?
At the end of the first movie, Jean Grey is exposed to the radiation in Magneto’s machine made to enhance the mutant gene in humans. 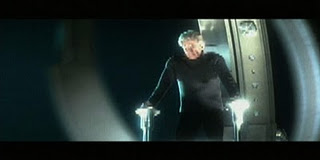 The second movie, we notice a change in Jean Grey. Scott Summers (Cyclops) even goes as far as telling Jean, “You haven’t been the same, since the incident at Liberty Island.” The incident he speaks of is the exposure to Magneto’s machine. Jean’s powers have grown noticeably and she exhibits a red fiery flare in her eyes when she utilizes her “evolved” powers.
At the end of the movie, Jean sacrifices herself by holding back the floods, so her fellow X-men may escape without being submerged in the rushing waters. A fiery aura surrounds Jean as the waters surround her and she is presumably drowned (very sad).

But wait, one of the final scenes shows the Alkaline lake after the flood. A slight fiery glimmer can be seen under the waters, in the shape of a bird…the phoenix! This also happens to echo a storyline where Jean Grey as the Phoenix was trapped under the ocean. The Phoenix entity encases Jean in a protective barrier and projects another Jean Grey, a clone of sorts, in order to escape.
Alright, so the phoenix portrayed in the comics is an extremely powerful entity that bonds itself to those with high levels of psi and mental ability. This bond allows the phoenix force to possess the host.
The Phoenix bonded with Jean Grey when she was a child after detecting her extraordinary mental capacity when Jean used her powers to try and save one of her playmates. The Phoenix entity laid dormant in Jean until she was in the X-Men. On a space mission, Jean is almost killed and the Phoenix entity surfaces in order to save her, but also taking control of her.
Jean begins referring to herself as the Phoenix and has newfound and super-sized powers. Unfortunately, some baddies with the power of illusion come in and manipulate the hell out of poor Phoenix. This makes Phoenix angry and brings about Dark Phoenix. Dark Phoenix not only go smash, but she destroys entire worlds (truth-fact).

So, yes the movie deviated a bit from the comic book’s mythos, and I can understand why. The Phoenix entity in the comic books took several issues to explain the awesomeness of the Phoenix’s power and origin. It would take a whole movie just to explore the phoenix entity. The first two movies did a nice job setting up where the movie version of the phoenix came from. A powerful mutant evolving into an even more powerful being. This seemed logical…
The third movie…Jean Grey resurfaces and calls herself the Phoenix. Yes!
I anticipated the third movie and was stoked, because I knew the Phoenix, one of my all-time favorite comic book villains, was going to me a main part of the storyline.
BALLS! There were way too many new mutants and characters introduced that made it difficult to follow along or care about the characters that had already been established in the first two movies. Not that would matter considering all the set-up they took the time to do in the first movies were completely discarded in the third.
Kitty Pryde joins the mutants and splinters the romance the first two movies took the time to develop between Rogue and Iceman. Jean Grey…is Phoenix, but the phoenix… is the result of…
A SPLIT PERSONALITY!??? WTF!!!!!!
None of the set-up to explain the growth of Jean’s powers as the result of evolution bringing about a super mutant with awesome power, movie version of phoenix, exists in the third movie. SHENANIGANS! All the scenes leading up to the evolution scenario might as well not have existed in the first two movies.  Not to mention that we never even see the trademark fiery phoenix in its pure form!!!!

Needless to say, the third movie was absolute crap!
Let’s hope the next X-Men installment, a prequel or origin storyline, is more consistent…

Anyway, gentle readers, I digress. The particular info-graphic this post started out with just happens to bring about some sensitive issues; thus, the X-Men movie rant. But, I will say again that I heart info-graphics. If you too enjoy them, check this out —->http://www.coolinfographics.com/

Sometimes, it’s good to be reminded not to take work or life too seriously. Finishing off Hispanic Heritage Month with Day of the Dead Family Night.
I help to sponsor and organize a conference with the Sankofa African Heritage Awareness organization every year. This was their 10th annual education-culture conference and this year’s theme was Debunking Racial Myths and Divisive Assertions That Nullify Community Relations and Hinder Social Development.
Fall is my favorite season. It’s unfortunate I live where we only get a couple weeks of solid fall weather before first winter hits. I just saw an article with the headline “Arctic Air, Wintry Precipitation Coming Soon!”
Conversations I have with my dog.
Whether it’s trying to hike up a mountain or navigating all the pressures and demand of the job, my body has a tendency to force me to take pause and slow down because I have pushed it to its limits. Today is one of those days. My limits aren’t as high as they used to be and coming to terms with that is the real struggle.
Chill fall vibes. She’s thinking of pumpkin spice and crisp leaves flowing in the wind. She’s probably just thinking of the car that zoomed by and their audacity for not pulling over and showering her with attention. Yeah, that’s what she’s thinking about.
%d bloggers like this: