Remember that short-lived show that never got enough cred from Fox (big surprise) about a bunch of renegade misfits, each in search of things like redemption, independence, love, adventure, sanctuary, and answers…

While each worked toward their own selfish goals they united through Serenity and had a quirky tendency to spout out insults in Chinese every now and then.

Another Joss Whedon kernel of brilliance. Unfortunately, it only lasted one season in 2002 and later resurrected onto the big screen in 2005. I never actually caught this show while it was on air. When the series was released on DVD, I purchased it because of the Whedon name. Admittedly, it took me few episodes to get into it. The idea that the show seemed like a Western in space was unappealing to me. My father was obsessed with Westerns and John Wayne, so I reached my fill of Westerns sometime between my childhood. and teenage years. This was Joss Whedon. Plus, Caleb from Buffy and Jasmine from Angel were in it, so it can’t be all that bad. I stick with it, and I realized this was so much more than a Western. The random breakout of Chinese, The aftermath of a war and rise of the Alliance, a naked Nathan Fillion, space hookers…what’s not to love!?
My good friend boo posted an article for me on Facebook that really did a nice job explaining what makes the show so fetch and genius! Firefly essentially gives us a nitty gritty science fiction world: Sci-fi Realism. While most popular science fiction verses portrayed more Utopian societies that have overcome selfish needs and social strife, Firefly portrays a world in which humanity has yet to overcome many of its flaws; a more realistic depiction according to the article. 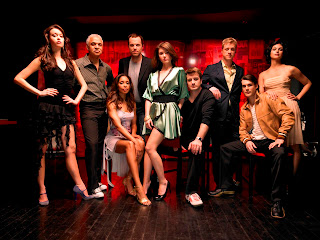 P.S.
Thanks to the world of Instant Play on Netflix, I’ve just discovered Battlestar Galactica, so good! I suspect I enjoyed Firefly for the same reasons I am so giddy about Captain Apollo, Starbuck. and CYLONS!