I have a pretty sweet job. One of the main things our department does on campus is plan and implement activities for the student body. As a result, I get to do a lot of pretty cool things. The latest project was renting out a theater for the premiere of…wait for it…the latest installment in the Twilight saga. Breaking Dawn Part II. There are a lot of perks that come with my jobby job. This isn’t one of them.

Keep in mind I haven’t seen any of the previous films nor have I read any of the books. The moment I learned that vampires sparkle in this series has spurned a barrage of mockery from me ever since. This was a vampire mythos I could not get on board with. Consequently, a co-worker of mine expressed she was cashing in on a favor that was long over-due for missing out on last year’s theater rental for the premiere of Breaking Dawn Part I. We agreed then, my payment would be to go to a movie of her choosing. Little did I know she would hold out a whole year let alone remember my little debt. I braced myself for the worst, but also told myself that it couldn’t all be bad. I had it on good authority that the majority of scenes showcased shirtless hunks and this installment contained a battle of epic proportions.

Below are my live-tweets as I embarked on this melodromatic and broody journey. Fair warning, there are tons of SPOILERS! I am sure my live-tweets have already caused tween rage and brought forth the wrath of angsty Twilight fanatics who were unable to make it to the premiere. Yeah, well bite me. 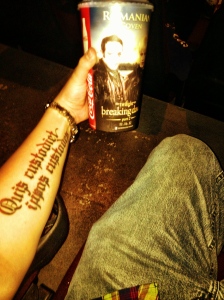 I’m gonna need this caffeine to get through this. God help me…

Live-Tweets during the viewing of Breaking Dawn Part II

Needless to say, I was not amused with what transpired toward the conclusion and the ending was just gross. However, the experience of watching the film in a theater full of college students (many with whom our department work with) laughing at the absurd moments, cheering at decapitation and maulings, and the mystery science theater esque atmosphere made it well worth it. Will I run out and get the previous installments or the books? That’s an emphatic NO.

Do I regret going to the final installment of a series I have scoffed at and mocked since their inception? See previous answer above.

“I hope I can be the autumn leaf, who looked at the sky and lived. And when it was time to leave gracefully, it knew life was a gift.” ~Dodinsky
Soaking in those lingering fall vibes before second winter hits. Lovin that autumn aesthetic. Fall time is the best time.
Sometimes, it’s good to be reminded not to take work or life too seriously. Finishing off Hispanic Heritage Month with Day of the Dead Family Night.
I help to sponsor and organize a conference with the Sankofa African Heritage Awareness organization every year. This was their 10th annual education-culture conference and this year’s theme was Debunking Racial Myths and Divisive Assertions That Nullify Community Relations and Hinder Social Development.
Fall is my favorite season. It’s unfortunate I live where we only get a couple weeks of solid fall weather before first winter hits. I just saw an article with the headline “Arctic Air, Wintry Precipitation Coming Soon!”
Conversations I have with my dog.
Loading Comments...
%d bloggers like this: